The whole world is yours to take

"The combination of a simultaneous increase in the quality of life, decrease in poverty, the prevalence of a free market, and technology has transformed the world we live in. "

Considering entrepreneurship? This is the absolute best time to start a business.

Running a business already? You have a lot more to gain just by staying the course. It’s like everything you have available to you today is optimized to help you and your business thrive.

There’s never been a better time for starting and running a business.

In a previous post titled The new age of entrepreneurship: Unique opportunities, new economy , we wrote about the heady concoction of technology available to you such as the Internet itself, email, chatbots, teleconferencing, marketing automation, process automation, apps for every conceivable purpose, and so much more.

Think of it as the golden age for entrepreneurship.

“As far as entrepreneurship is concerned, you have global opportunities, technology supported by incredible computing power, borderless access to contractual talent, increased connectivity, real-time information, smart systems, big data, and so much more.”

They say that change is the only constant.

We, however, believe that change doesn’t have to be boring; it can be incredibly exciting too.

The combination of a simultaneous increase in the quality of life, decrease in poverty, the prevalence of a free market, and technology has transformed the world we live in.

If you were asked to picture the state of the whole world in your head right now, what comes up?

While all of those exist worldwide to a varying extent (depending on where you live), it’s proven that most of all of the above are either controlled or at least abating for the last several millennia.

According to Steven Pinker –author of The Better Angels of our Nature  (FP highly recommends everyone reads this book) and a Johnstone Family Professor at the Department of Psychology at the Harvard University — the world we live in today has already negated the ill effects of wars (to a large extent), slavery, infanticide, assassinations, ethnic cleansing, and mass genocide.

Today, you won’t see a Khmer Regime, the rise of Hitler, the atrocities on Jews, or the rampant spread of slavery anymore. Recurrence of The Soviet Famine, The Japanese War Crimes, and The Massacre of Hutu Refugees during the First Congo War.

While it’s not to say that there’s absolutely no chance of war, violence, or famines; it’ll never be as bad as it has been.

The human life, as we know it, has been steadily progressing over the last few decades.

The rise of the free market, the worldwide push for peace among nations, the juggernaut of consumerism, technology and the free will of individuals will ensure that we’ll see less turbulent times now.

Further,  the Internet is already breaking down barriers while technology is helping us achieve more with much less. 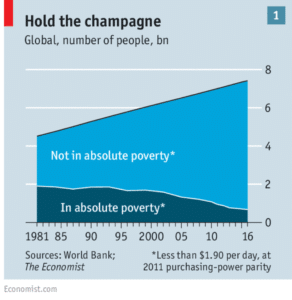 Global poverty — thanks to the continual rise of economies the world over, among other things — continues to decline.

According to The Economist, someone in the world escapes poverty every 1.2 seconds.

Homi Kharas of the Brooking Institute created an interesting, live World Poverty clock if you want to check it out.

It could be that the actual poverty decline rates might be slowing down, there’s still reason to cheer thanks to the free market, the expanse of consumerism globally, and the advancement of technology.

Now, add the declining global poverty and see what the effect of technology does to the global economy at large coupled with the success of the free market.

If you actually think about it, Alvin Toffler predicted three types of societies that the world will see, the “third wave” being the post-industrial society which will witness the industrial age.

Alvin was on the point with it. Eric Schmidt of Google goes as far as to say that the World has reached an Inflection point.

You are living in it. You are experiencing it.

You are a beneficiary of the rise and impact of technology.

If you are reading this, you are already in the thick of the Fourth Industrial revolution — an era which is driven by a staggering range of technologies which include (but not limited to):

Superior computing capabilities & Storage: We’ve come a long way from the vacuum tube to the world’s most powerful computer in 2018 called Summit. At max capacity, Summit can perform at 200 petaflops — that’s 200 quadrillion calculations per second. Even for the average user, computing has never seen this kind of power, storage, and processing power in history.

Augmented Reality: If wanted to experience what it might have felt like to walk the earth when Dinosaurs existed, would you be able to do it? Earlier, it wasn’t possible except for you to imagine it. Today, you can, thanks to augmented reality — a technology that helps provide you with an interactive experience of a real-world environment (with real objects) super-imposed with computer-generated perceptual information. AR is all set to change the fields of education, literature, visual arts, architecture, medical design, and industrial design (to begin with).

Virtual Reality: Interactive, computer-generated experiences bring in a fantastical world that you can immerse yourself in. Currently used for simulation exercises, military, education, healthcare, and training. Virtual reality is often used to simulate real-world training without the actual risk such as flight training simulation, combat training (military, police, and security), and for other training purposes.

3D printing: Imagine thinking something up and actually creating it in physical form, all by yourself. 3D printers can do that and the technology already holds promises. 3D printing industry has already reached $7 billion. This is just the beginning.

Digital health: Can you imagine living in a world where each medical condition, disease, and complication can be analyzed, shared, and stored seamlessly worldwide? Medical professionals, researchers, doctors, and others can easily chart out and pit comparative data collected from the analysis of medical data from various populations, demographical profiles, and patients all over the world.

Digitization of companies and/or governments: Companies and governments are looking to “digitize” everything — transactions, records, taxation, data, business processes or administrative processes, interactions with customers (or public), providing digital access to information, etc.

Blockchain: Shared-database technology which helps create a backbone for digital transactions (among other use cases) such as Bitcoin. Now, banks, insurance companies, and several other businesses (in various industries) are exploring ways to use Blockchain.

All this technology advancement coupled with the advantages of free-market economics can only have you to thank for the fact that you are alive as an entrepreneur (or soon to be) today.

Thanks to the free markets:

As a business, you are sitting at the edge of an exciting period in the history of mankind. You can create products that the markets want, sell at a price you set, profit from the value you provide and make your customers come back for more.

Set up shop in any country, operate from another country, and sell globally. The borderless, technology-driven world with relentless hungry for your products or services has never been possible before.