How to profit from chasing the WEIRD (& not the masses)

Before the industrial revolution, “stuff” was made to order.

Artisans and craftsmen would get to work and start creating or producing items (from chandeliers to the emperor’s new clothes) only when they had a customer to begin with.

In that era, no one would produce goods waiting, hoping, and praying that someone would walk in and make a purchase at a later date.

While things were slow and inefficient, the items produced were of exemplary craftsmanship.

Then, the Industrial revolution came about.

The industrial revolution was that time in the history of mankind when goods could be mass produced and then advertised to the masses.

You could spin up an ad, get mass attention, and sell in volumes. The industrial revolution practically invented the assembly line. Companies that mass produced products enjoyed the economies of scale, cheap labor, and vast inventories while only worrying about selling later.

Customers, during the Industrial revolution, would indeed wait and then snap up products as they are mass produced. There were few companies that could mass produced and very people who could afford to buy.

Most of the production and consumption was largely local.

It was Henry Ford’s beloved assembly line, created due to Ford’s determination to produce Model T at scale, that led to an absolute and complete change in the psyche of American business.

Henry’s original assembly line is no longer the same, but the concept of mass production remains to this day.

So much that the very existence of mass production — followed by mass distribution, mass advertising, and mass consumption — now stands at a point where it’s waiting to crumble to something no one saw coming: The weird.

Seth Godin, in his book We are all Weird: The Rise of Tribes & The End of Normal, writes about how you see all sorts of cults, tribes, and movements around almost everything weird.

He summarises the “Weird” as follows:

His bone of contention?

Companies continue the almost-dead mass production and mass advertising practices. He believes that the “masses” don’t even exist.

Corporate giants, the industry’s collective PR machines, ad agencies, and everyone else is still trying to aim at the “masses” that has already disintegrated into little — but too many to count and a lot of weird to take — groups or silos.

Each of those groups want something unique. Each member of a group believes in something and everything he or she does while staying attached to that group. Each of these members want products or services that fall in line (no questions asked) with the principles, values, and beliefs of that group.

People are rolling with worldwide movements around something or the other. Everything they’ll consume will center around that movement.

Keto Diet: low-carb,high-fat diet that helps lose weight while bringing home a few other benefits such as resistance to Alzheimer’s, cancer, epilepsy, and diabetes.

So, what does an entire planet of people following #keto or #ketodiet want? A basket of food items prepared specifically for #keto around Meat, fatty fish, eggs, healthy oils, avocado, and low-carb veggies.

LARPers: Strange comes to age with LARPers (Live-action Role-Playing) of the world. Grown up men and women act out their favorite characters or adopt assumed identities to just live it up. LARPing is now a reality from Minneapolis to Moscow and there are several hardcore LARPers in the world today.

LARPers bring all sorts of fictitious characters to life: a Zombie Ronald McDonald; a mutant named Takelage from the mutant world of Mutake; Marie and Louise — zombie girl twins, estimated to be around 10 years old each.

How about entrepreneurship itself, you wonder?

In Seth Godin’s words, this is how it’s like now:

If there is one think you’d take away from Seth’s book, it’s to ask yourself a single question:

As an entrepreneur, do you want to create for, market to, and embrace the fast-increasing population that isn’t normal? In other words, which side are you on — fighting for the status quo or rooting for the weird?

In the new world of entrepreneurship, it’s a decision that faces us as entrepreneurs being ushered into this bold new era where “weird” and “opportunities” co-exist.

In our case, for instance, as we develop or design websites, or when you strive to design an app, or when we are trying to chalk out a profitable strategy for our clients’ business, should we seek to appeal to the mass or should we carve out a niche and chase the weird?

Seth already has the answer in his book. We already have the answer as to who exactly we choose to serve as clients when we set up our creative digital agency.

The big question for you is this: Do you have an answer? Who are you rooting for — the masses or the weird? Who exactly matches your buyer persona? Who is your tribe and what kind of a community are you trying to build so that your business can support and rally behind the community?

Here are a few guiding steps for you to profit from the weird, the new normal, the rise of the tribes, and the community-driven approach to marketing pandering to the ever-changing face of customers:

Position your business (by pandering to the weird)

It’s a rising movement around the world where thousands of normal folks seek financial independence to the point that they can liberate themselves from the drudgery of 9-5, or the never ending feast-famine cycles that are all too common with the self-employed among us.

People who are passionate about FIRE have regular jobs (or are self-employed) and they have the same expenses as anyone else has.

Despite that, they boast of an amazing saving rate of anywhere from 50% to 90% of their regular income into investments that’ll slowly and surely help them amass a cash corpus enough to provide for their livelihood.

Is that even possible? Yes.

So much that it’s a passionate movement and members of these communities practice prudence, discipline, determination, and consistent investing patterns.

Now, imagine that you are a financial consultant. What would you choose to run your business like?

Financial Consulting is a business we are all aware of, but the approach you take is going to be different.

Depending on your choice above, how you’ll position yourself, your brand, the voice, and everything about your marketing strategy will also change.

Cash comes when you pull heartstrings

You know what’s common between all the global communities of fitness freaks, vegans, LARPers, Paleo dieters, Keto dieters, FIRE members, or any other weird groups you might have heard of (and for many other groups that’ll rise tomorrow)?

They all have their hearts in it.

The new calling for your business is to first develop products and services that are specifically created for one of those communities that your brand relates to.

Next, you’d have to carefully ease yourself into the community. In fact, your primary job is to become the architect of your community, as Harrison Kratz of Convince And Convert writes.

Your job, especially with marketing, is to develop a brand in a way that aligns with the exact same values, thoughts, principles, and beliefs that the particular group you are targeting.

Be a resource. Give to your community first. Empower your members. Grow your tribe.

Here’s the big thing: If you start pushing your products and services within passionate and purposeful communities such as any of the above, you’ll soon be kicked out (from virtually everywhere you try). On top of that, you’ll face the wrath of their collective scorn on social media, on review sites, and elsewhere.

The key while marketing niche products (built for the weird) is to not push at all; it’s to build a thriving community powered by a solid content strategy. It’s to provide value with helpful content.

Your job isn’t marketing at all. It’s the total opposite of that — it’s to inspire, educate, teach, and train.

It’s to dispense knowledge, become known as an authority figure while doing exactly what your community is known to be “weird” for.

For instance, Mr. Money Mustache is already living the FIRE life — living prudently, having retired in later 30s, and never has to work again. He maintains a strong presence on the web inspiring others to do the same. There are several others such as FinancialSamurai, GetRichSlowly, and ThinkSaveRetire.

Each of those blogs (or should we call them communities?) make money. They really do.

Just not in the way that General Motors or Pepsi or Nestle do.

If you studied marketing in college, you’ve also heard about The Marketing Mix, which was as follows. 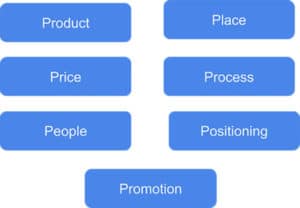 If Seth’s wisdom — and the actual reality of the world we live in today — is anything to go by, those pillars that make up the Marketing Mix (and also the 4 Cs of marketing) have already changed. 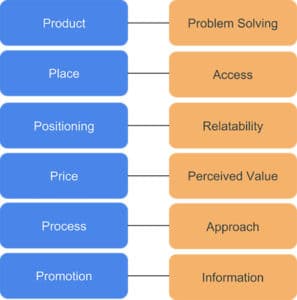 See how the marketing mix evolved?

Products are not as important as how well you solve the problem; place doesn’t matter, but access to products certainly does.

Positioning now relates to how well your products align with the community you target; price doesn’t matter, perceived value of your product (combined with social proof does).

If your product has a community backing it up, it’s a winner. Process is the least of your customers’ concern but they do care about your story.

Finally, you can’t just promote anymore. You’d have to lead your marketing with information (which explains the importance of content marketing now).

We’ll do the song-and-dance along with the war cry again because it’s worth repeating): Be authentic, be you, build a community, earn your customers, and make a difference with your business.

How to profit from chasing the WEIRD (& not the masses)